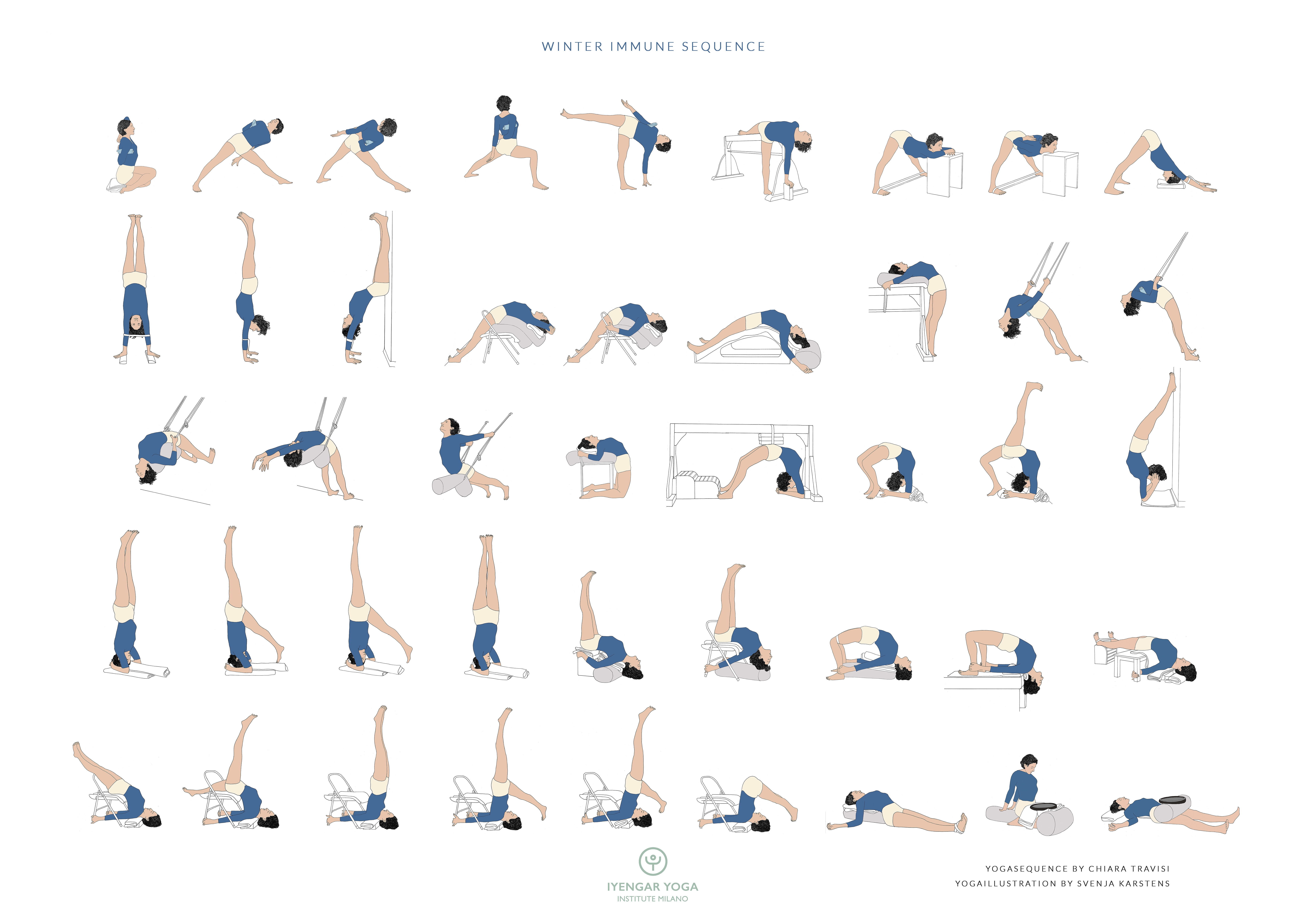 The second sequence I am presenting deals with Winter and is focused on ‘immunity’. As for the Fall detox sequence, the Immune sequence too is not intendedto substitute any therapeutic prescription in case of illness. Nor I want to give the misleading message that yoga can cure any condition. Scientific evidence however is ever increasing corroborating the conclusion that a regular practice of yog-asana, pranayama and meditation techniques can actually be employed as a very interesting ancillary treatment for many health disorders, with low costs and almost no negative counter side effects.

So, how yoga can help sustain the capacity of our embodiment to produce an adequate immune response against external pathogens? The response is multifaceted and I recommend to approach it with the due level of complexity to avoid misinterpretations.

The first aspect to be considered is that the immune system’s efficiency is dramatically dependent on the efficacy and pattern of fluid circulation in the body. Both the cells of the innate and the acquired immune systems in fact move through the body fluids as patrols looking for external agents. Leukocytes (white blood cells) are found in the blood, lymph and lymphoid structures. In addition, white blood cells are located in tissues and, often, they are produced in the bone marrow “on demand” by the acquired immune system in case foreign pathogens are detected, but then they migrate either in the thymus or in the lymphoid structures.

Because of such interdependence between circulation and immune response, it appears clear that yog-asana practice can exert a positive effect just for it lets us move thus ameliorating fluid circulation. Yet, this is the case for any other kind of movement: in fact, a non-sedentary life-style is per se a sort of form of investment to enhance one’s own health condition. There is however another point which makes yoga practice (asana, pranayama and meditation) particularly effective, and this is yoga’s capacity to balance the autonomic nervous system (ANS). This is the true gift of yog-asana and pranayama practice: their ability to modulate the ANS triggering an activation of either the sympathetic nervous system or the parasympathetic nervous system.

But how yog-asana does act on the ANS? The main reason is that, through the great variety of asana we can choose upon during our practice we can produce a direct mechanical stimulation on the ANS which contributes to keep it in balance. So, if the ANS usually lays beyond our voluntary control for we cannot modulate it directly at will, we can have the chance to do it indirectly in yog-asana practice because the ANS’s nerve endings run along the spine. In this respect, just to give an example (though the available scientific literature does not yet provide much details) we, as practitioners, do experience heuristically that spinal extensions (back extension asanas) produce an activation of the sympathetic system while spinal flections foster the parasympathetic one. Similarly, inverted shoulder stand (Sarvangasana) allows the parasympathetic system to dominate over the sympathetic as supine and relaxion asanas do. Similarly, prāṇāyāma techniques based on slow pace breathing patters exert a similar effect.

As for the efficiency of the immune systems, both branches of the ANS need to be in good shape. The immune system itself needs to be able of acting promptly when needed to contrast an infection, but also being ready to slow down as the infection recedes. So, it is not just a matter of “stimulating” but, rather, an immune system in good health will have to show a good balance. There are several channels of both suppression and activation of the immune system modulated by autonomic factors and contributing to keep our immune system in dynamic balance.

Any imbalances to an organism homeostasis, as in the case of an infection, elicit a complex stress response that involves the coordinated activation of functionally overlapping neuroendocrine and autonomic systems. These complex systems interact at multiple levels. Both neuroendocrine (the primary hormonal pathway is hypothalamic–pituitary–adrenal axis) and neuronal (direct sympathetic innervation of the lymphoid organs) pathways are involved in the control of the humoral and cellular immune responses. Among these critical systems is the so-called hypothalamic–pituitary–adrenal (HPA) axis (discovered already 70 year ago now), which is triggered by stressors of various sources (physical, emotional, immunological, etc.) to provoke the systemic release of glucocorticoids (GCs) (see for example Bellavance and Rives, 2004). The precise regulation of the activity of the HPA axis is of the utmost importance since both an excessive or insufficient release of GCs entail severe detrimental metabolic and immunological effects. As a matter of fact, chronic exposure to GCs results in various adverse side effects such as osteoporosis, diabetes, hypertension, dyslipidemia, and even neurodegeneration (see for example Bellavance and Rives, 2004). On the other hand, a deficient HPA axis is commonly observed in the clinic in a wide range of autoimmune and inflammatory diseases. The activity of the HPA axis is regulated by multiple afferent sympathetic, parasympathetic, and limbic circuits (e.g., amygdala, hippocampus, and medial prefrontal cortex) innervating either directly or indirectly the paraventricular nucleus (PVN) of the hypothalamus (see Aguillera, 2011).

Yoga was found to reverse the expression of inflammatory mediators and to maintain homeostasis and physiological functions of various other systems that are related to immune responses. Yoga practices downregulate the expression of a master regulator of inflammation and NF-κB and subsequently influenced the reduction of pro-inflammatory cytokines in various chronic stress-induced diseases and also maintain balanced endocrine hormones production.

Besides, yog-asana can contribute on two more factors that can impact the susceptibility to infections. One is fatigue and the other one is our psychological condition.

As for fatigue, it is well-known that exhaustion is a significant factor in the vulnerability to illnesses. Heavy training in endurance athletes for example appears to be linked to a depression of the neutrophil function to meet and kill bacteria, while moderate exercise as yoga can increase the strength of the immune system (see for example Venkatesh et al., 2020).

Psychoimmunology is a new field and goes hand in hand with the discovery of a communication between the brain and the immune system and its modulating effect on behavior (see for example, França&nbspand&nbspTorello, 2017). Because the cytokines connect the immune system to the brain as we discussed, somatic medical condition can have an impact on emotions and moods and viceversa. In long-lasting depression for instance cytokine levels are usually high. Studies have also demonstrated the important regulatory effects of yoga therapy on brain structure and functions. In this respect, yoga practice enhances inner stability, self-confidence, sense of purpose, empathy and can thus offer a great contribution.

Another factor to be considered as a contribution of yog-asanas practice is that they better vascularize those specific organs and systems involved in the immune response. In particular: the brain, the thymus, the lymph nodes, the spleen and the thyroid. These are all parts which together orchestrate our immune capacity and which are all either directly innervated by the autonomic nervous system or in communication with it, as we have discussed. Creating space for each organ to properly function and increasing their nourishment and detoxification from catabolites are, in fact, two paramount principles of a “therapeutic” approach in Iyengar Yoga.

Lastly, the literature reports also an intimate connection between the immune and the musculoskeletal systems, suggested by evidence of immunosuppressive effects of space travel on astronauts (see e.g. Guéguinou et al., 2009). During extended space flight in fact the immune system is compromise by the lack of gravity. In a weightless environment in fact bones soften and muscles become flabby. In this respect too yog-asana practice, and in particular standing asanas, can play a role.

In light of thegrowing body of evidence corroborating that yoga therapy has immunomodulatory effect, the sequence I propose is composed by three main parts. Part 1 is an anti-gravitational work in standing asanas adapted in order to create a chest opening to stimulate both the thymus area, the thyroid and lymphatic ones. Part 2 is focused on inversions with the aim of boosting fluid circulation, organic vascularization and balancing the so-called hypothalamic–pituitary–adrenal (HPA) axis. Here I alternate inversions in combination with active and supported back extensions either with a complete through extension or a complete chin lock. Such alternation is intended to stimulate both the sympathetic and parasympathetic systems in search of an overall capacity of the ANS to find a balance and an efficient homeostatic capacity.

Robin, M. (2009). Handbook for Yogasana Teachers. The incorporation of Neuroscience, Physiology and Anatomy into the Practice. Wheatmark Eds. Tucson Arizona 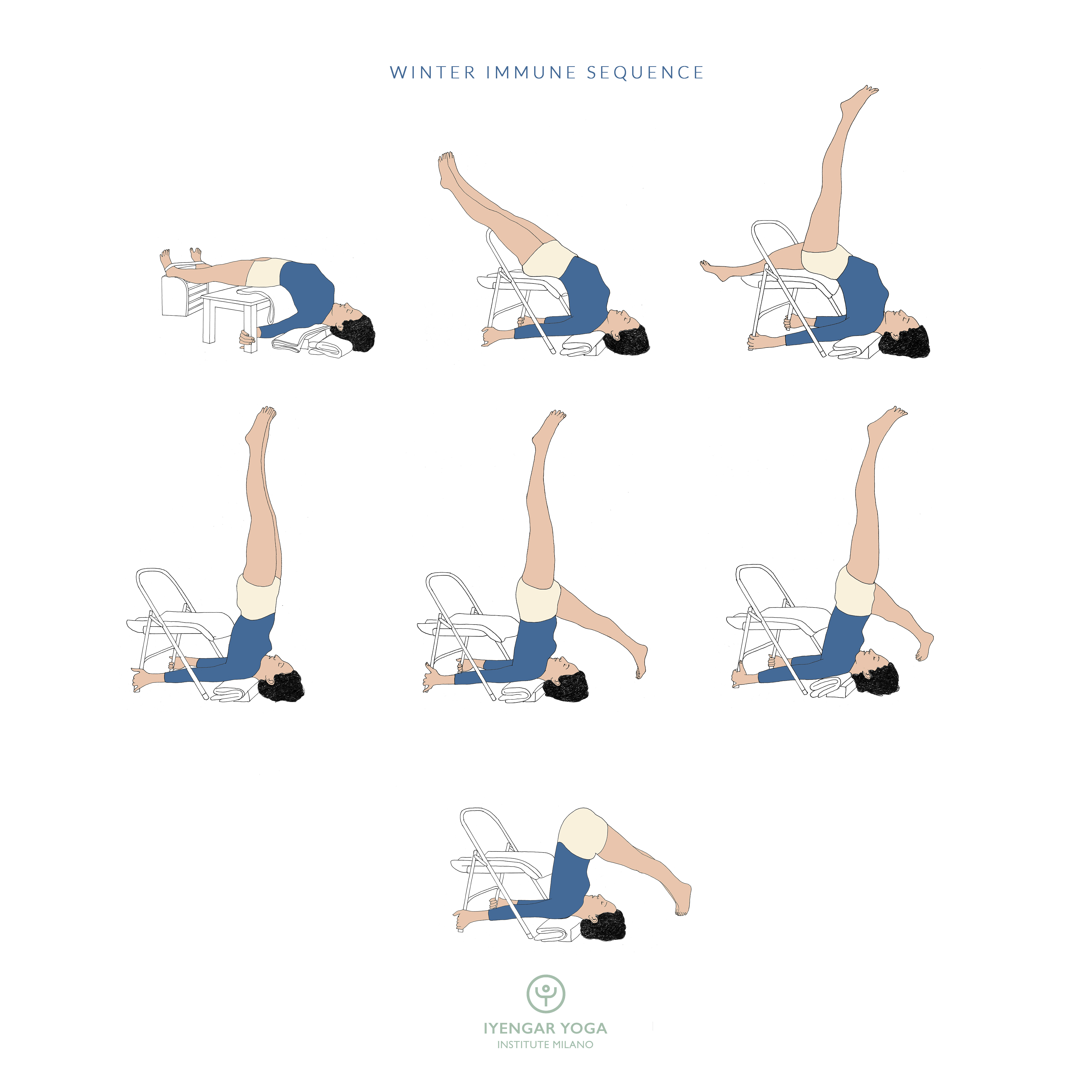 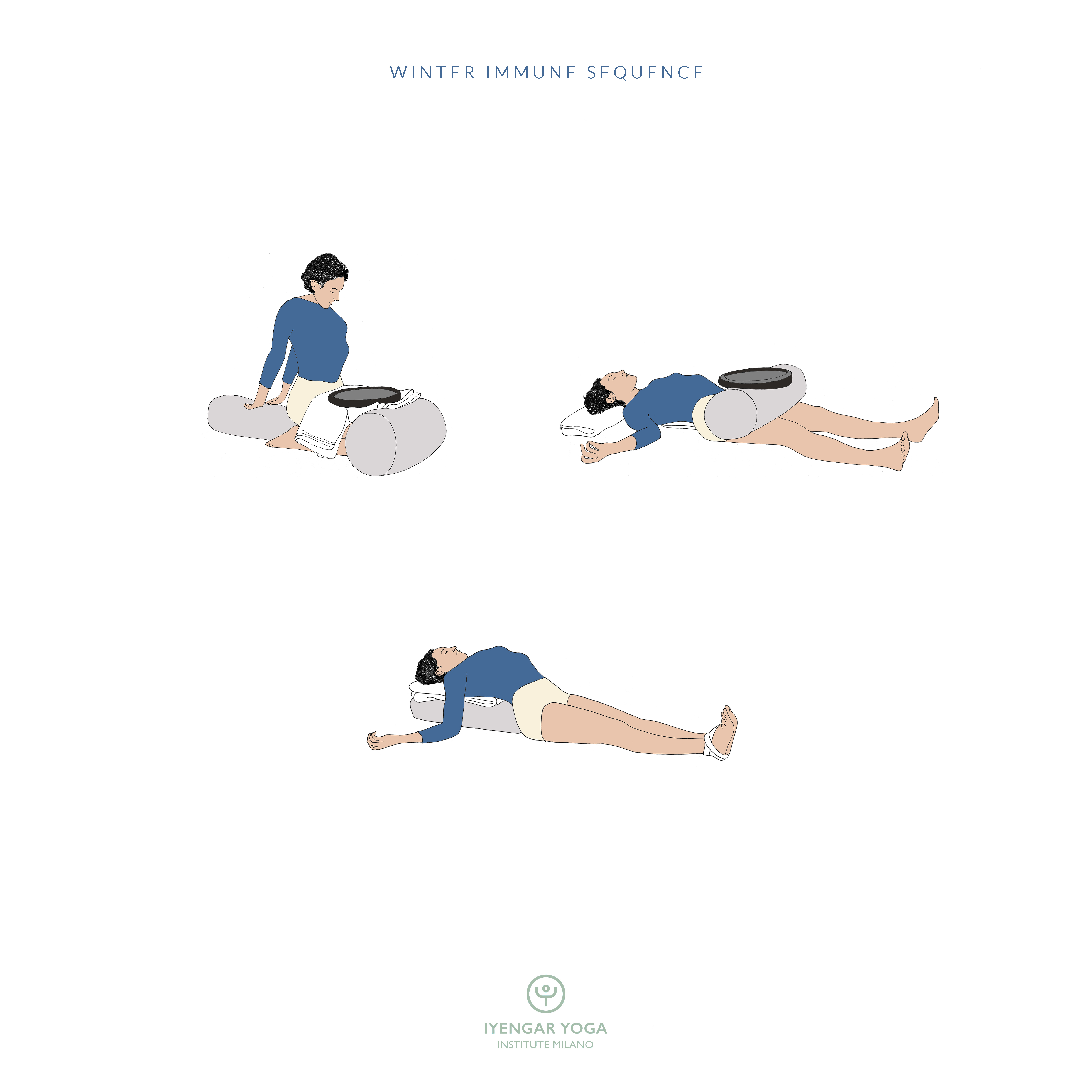 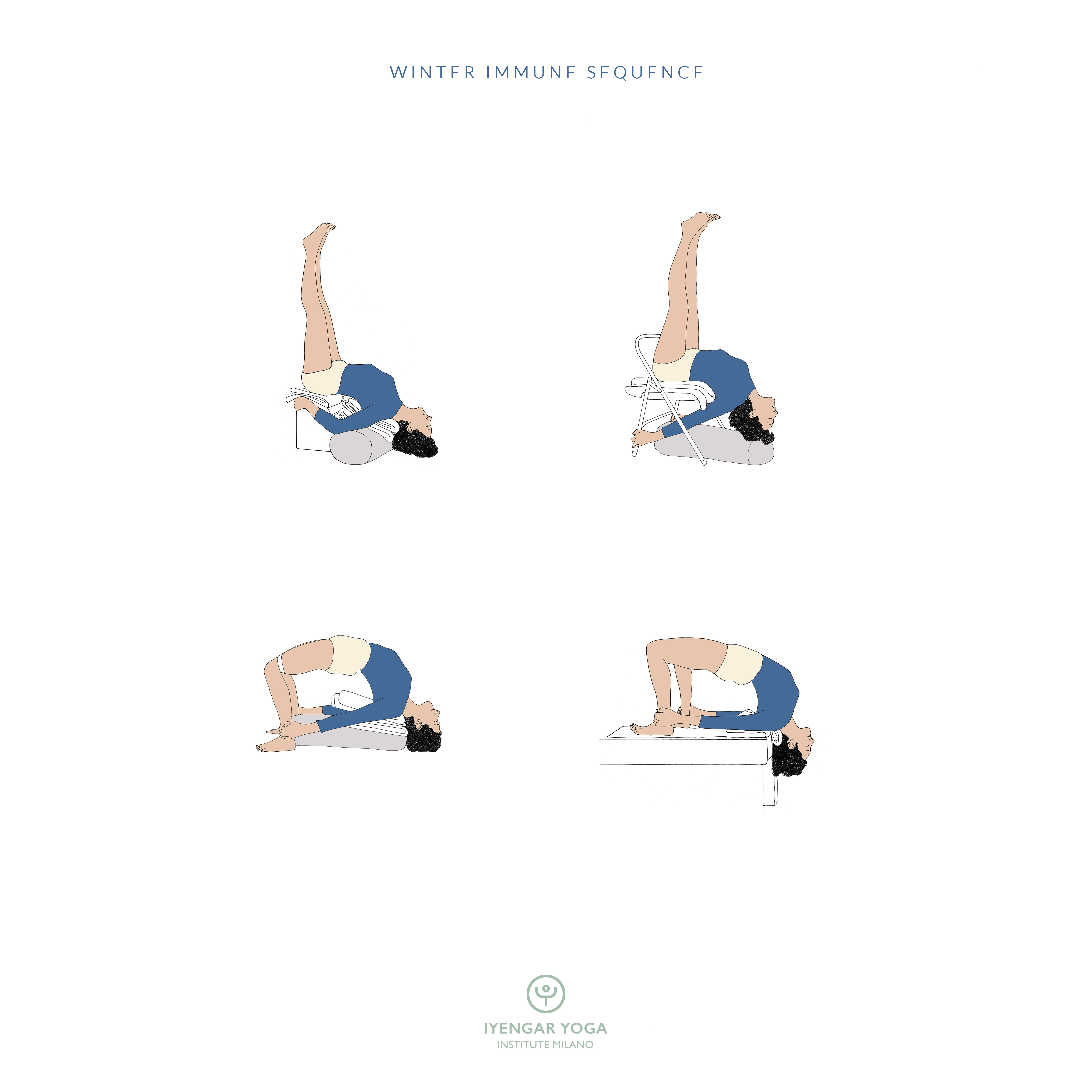